SIla Arun,
Pankaj Berry,
Nicolas Chagrin,
Divya Dutta,
Chris England,
Arindham Ghosh,
Nalini Chatterjee,
Born in a prominent Bengali family, Subhas had dedicated much of his younger years by being actively involved in ridding the British from India. For this purpose he joined hands with stalwarts such as Jawaharlal Nehru and Mohandas Gandhi, but expressed his frustration, especially with Gandhi’s slow and painstaking way of trying to win over the enemy with love. It is for this reason, he decided to separate from the Congress Party. The British became weary of him, placed him under arrest, but when he started a hunger strike unto death, they let him go, but kept him under surveillance. Subhas eluded the police, under the guise of Pathan Mohammad Ziauddin, crossed the Indian border in Afghanistan so that he could enter Russia and form an Indian Army to oust the British. His efforts failed, he ended up as Italian Orlando Mashtar, with an office in Germany. He did manage to convince the Nazis, despite of Hitler’s views in “Main Kempf” that he preferred India to remain colonized under
Netaji Subhas Chandra Bose: The Forgotten Hero 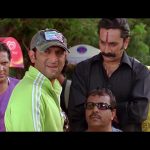